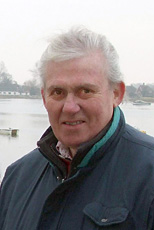 Leonard Murrell spent his informative years in Deal on the Kent Coast and developed an affinity with the sea and coastline. He subsequently served 15 years in the Royal Navy followed by 40 years in the Defence Industry.

Largely self-taught Len took up painting in the early 1990’s and now works exclusively in oils. His preference is to work in the studio using a collection of photographs and sketches accumulated over the years.
His paintings focus notably on marine subjects, the theme of the sea, rivers and boats subject-matter.

His painting approach starts with thin darks to mid-tones then lights adjusting the values and rounding the forms as the painting develops endeavour to finish one section at a time with soften edges to allow a seamless transition for the next section. If a section is not working he will wipe out with a rag – the ‘ghost image’ retained can quite often offer an atmospheric feature to the composition to capitalise on.

His work can be seen at the The Frame Gallery in Odiham, BiGillian Gallery, Bourne-End (nr. Marlow). Each year in the summer he holds a one-man exhibition at the Oxmarket Arts Centre Chichester and is a long standing member of the Odiham Art Group in North Hampshire. He is also represented by Creative Coverage for marketing services.

He has also worked on number of privately commissioned paintings, please contact if this is of interest. Note: Commissions undertaken are not limited to marine subjects only.

Inspiration comes from the works of Edward Seago and David Curtis.
Next
Previous